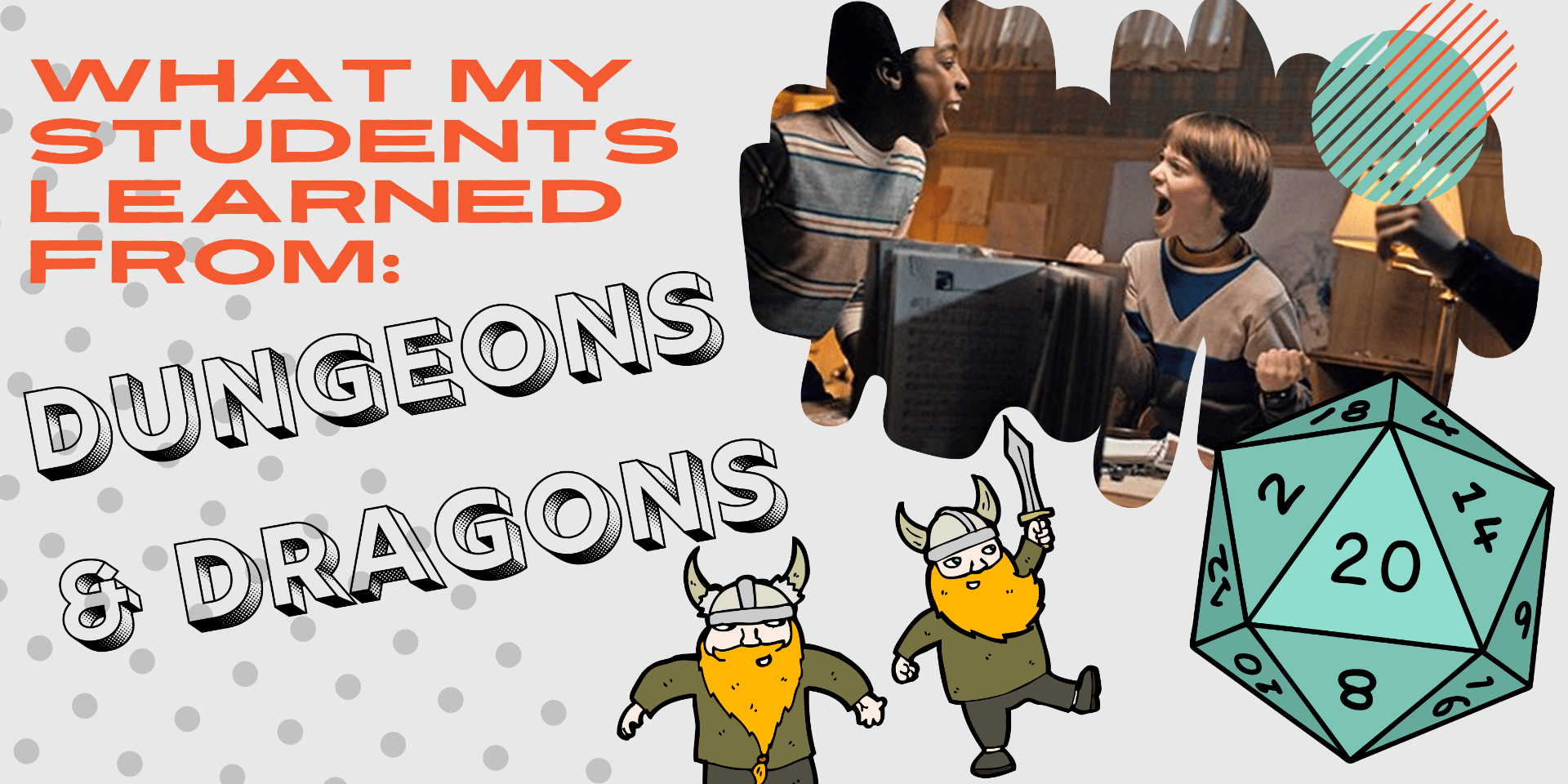 What My Students Learned From Playing Dungeons & Dragons

As part of my school’s Summer Learning Program, we offered a variety of teacher-led clubs that included basketball, recycled arts, ukulele, as well as Dungeons and Dragons. It was an awesome experience to watch the same group of students grow over the duration of the club. It was such a slow, holistic growth that it was almost imperceptible but the choices they made and the dynamics of their relationships coalesced around the gaming table each day to reveal the important, if subtle, changes. These are some of the lessons my students learned from playing Dungeons Dragons.

There was a group of Grade 9 students in Texas who substantially outperformed their district on a statewide standardized test who all had one surprising thing in common: they all were members of the school’s Dungeons & Dragons club.

A coincidence? Maybe not! (source)

A game that is almost 50 years old and completely analog (no tech) is somehow miraculously making a comeback thanks to popular media like Stranger Things. If you don’t already know what Dungeons and Dragons is (D&D) Vox has an excellent primer HERE. It can be loosely defined as a game but is better described as a collaborative storytelling exercise akin to the old 80’s “Choose Your Own Adventure” novels. A player creates a character and then with the help of a storytelling guide (Dungeon Master) all the characters participate in a story that develops in real-time based on their choices and actions. The amazing part is that each group will play a story differently and even if you’ve already used this story before, it never ends up the same. Each group and each game is unique and can never be replicated. I think that is what makes the game so special and creates such a strong bond between players. You don’t really need anything other than some dice and your imagination, but whiteboards, dry erase markers, sound effects, memes, and snacks can sometimes seem essential.

The first task of the “game” is one of the most difficult hurdles to clear, a very existential question: who are you going to be? Creating your character is probably the most integral part of the game because it’s going to represent you for the next x amount of time. The most effective way to do this is simply just to have the player/student describe the character they’re thinking of, and then move forward from there. An example: A student/player said they wanted to be “like really big and strong and have a huge ax.” This is a great start but a boring character, so now you have to tease out their personality, what is to like about them, what is their motivation, what are their flaws? In this case, his story behind the “giant soldier ax man” was that ax man (Thokk) ended up retiring from the army after he saw too many people die and now he wanted to find his old commander and bring him to justice. If you’re stuck, the rulebook literally has a section for traits, motivations, flaws, etc. From here they get a character sheet and assign points to make their character strong, smart, agile, charismatic, etc.

The next part is starting the story, there are tons of prewritten adventures that will give you maps, prompts, quests, missions, etc. All you need to do is read and then roll the dice to determine the outcomes. If a player wants to do something they roll a dice and add their character’s attribute score to it and viola if the number of the die + their attribute is high enough they succeed, if not they don’t. This is all in the rulebook and there ARE rules, but honestly, you should only use them if they’re adding fun and meaning to the game. The best part isn’t following all the rules, it’s watching the group overcome a problem. Honestly fighting the monsters and dragons is the easiest part of the game; it’s the puzzles and riddles that happen in between battles are where the group’s dynamics really grow and shine. The lessons learned do happen in the context of a game, but they also happen simultaneously in the context of a complicated, real-world, social dynamic. They help in the game, yes, but they also help in everyday life. In fact, the experience was so meaningful to one talented 8th grader that they drew, animated, and voiced a short cartoon based on our weekly adventure. She was so shy that she almost didn’t share, but everyone loved it and soon students were asking her about future episodes. 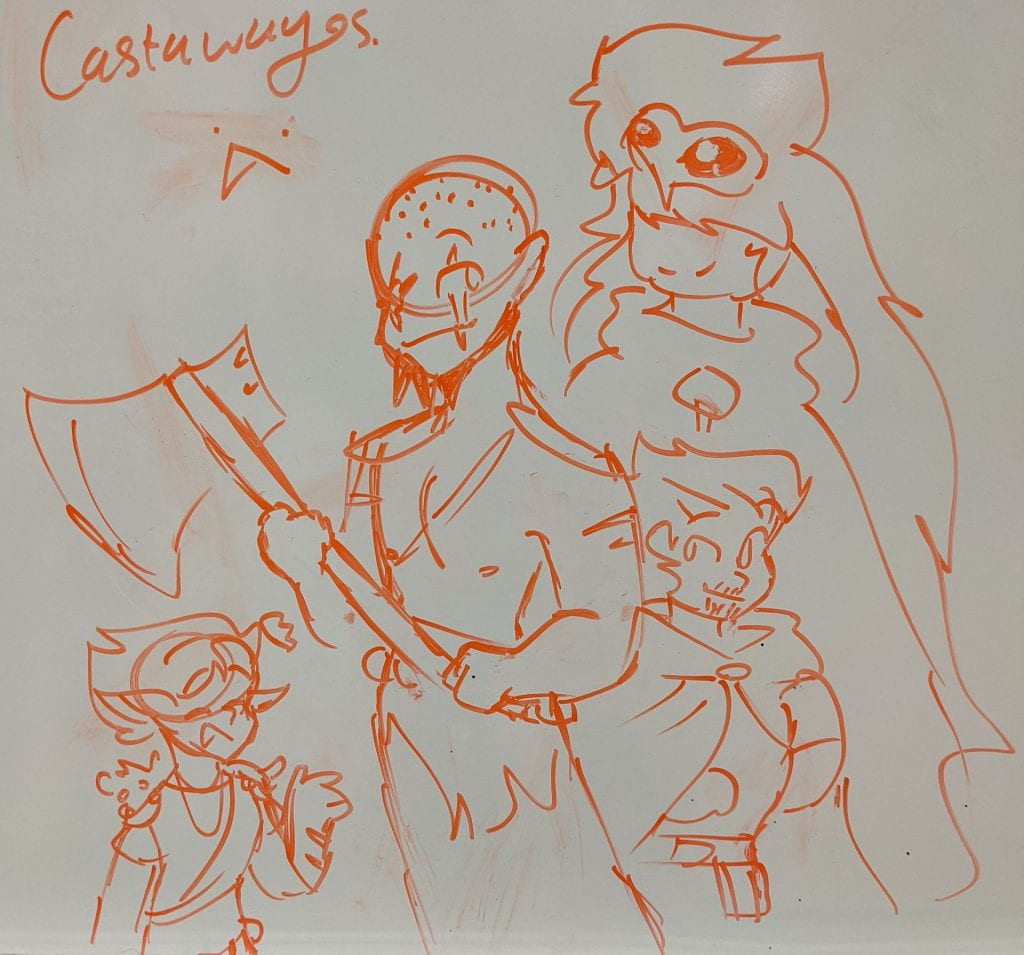 Over the course of 3x/week for 5 weeks a small group of 6th-8th grade middle schoolers beat the summer heat by congregating in an air-conditioned classroom. Some got dropped off, some took the bus. They did complex mental math including calculating probability. They took on a role, acted, made decisions from a perspective outside their own, and developed empathy. They stood up for ideas they believed in, while providing rationale and evidence to convince their peers. They also laughed, yelled, screamed, and then laughed some more. They had a great time. They were able to take a lot of social risks that middle schoolers might struggle with, but because it was in the context of the game the risk (failure) wasn’t personal and wasn’t permanent. They suffered setbacks and showed resilience and in the end, used creativity to solve problems that even a few weeks ago, wouldn’t have happened. I want to give a few anecdotal stories from our time this summer that illustrate the depth and breadth of the lessons learned.

Lesson 1: Don’t get taken advantage of – The first mission my players (students) took on was stopping the zombies that were coming to life in the catacombs underneath the church. They immediately ran down and like any zombie movie started bashing heads, however, they forgot to ask for a reward or negotiate a contract. So when they finished, a paltry reward awaited them. The students were incensed! “What we did all that work for 50 gold? That’s trash” However, this was an important lesson learned because you can bet from then on every time they took on a new task or mission they asked how much gold they were getting. By the end of the summer, they were shrewd negotiators (that to be honest sometimes bordered on blackmail.) I was not subtle in my framing of this, pointing out their success (even giving them extra rewards – yea positive reinforcement!) You’re going to have to do this when buying a car, interviewing for a job, etc.

Lesson 2: Plan Ahead – This was another lesson where they learned from their failures. After getting to the top of a tall house they inadvertently set on fire (long story) they realized they had no water to put out the fire, no ladder, no rope, or really anything at all. Situations like this came up again and again, they weren’t prepared. Several game sessions later, they were tasked with orchestrating a prison break, but this time they asked a ton of questions, how high were the walls, how many cells were there, etc, and brought supplies they needed including rope, grappling hooks, crowbars, and lockpicks. Their plan went off so smoothly and they even escaped via a zipline from the roof! (a student saw got the idea from a survival show.) They were planning ahead, asking anticipatory questions, and then adapting their plans in real-time. It might be a game but those are some high-level life skills right there.

Lesson 3: Cooperation & Compromise – The real-life dynamics of the group were split up pretty evenly between boys and girls, and a non-binary member (who sided with the girls usually). Decision-making and group alliances quickly split into factions with the boys not listening, nor cooperating, with the other group of students. They’d run ahead or not share their treasure, just bad sportsmanship. Eventually, though, they either got in over their heads or missed a piece of a puzzle, and needed to ask for help. It played out like this for longer than I would have liked but eventually, the group coalesced into a team. As soon as that happened their level of play and performance in the game just grew exponentially. They worked together, asking each other for advice, and recognized the strength and shortcomings of the different characters in-game. For example, the big strong ax guy lifted a gate just enough for a small character to scurry underneath it or having the musically-inclined member (who just graduated college for music[in-game]) perform as a distraction, or the jabber jaw of the group do the talking in order to get the information they needed. It was so great to see these roles develop both in-game for the characters and out of the game for the real players as well.

Lesson 4: Stand up for yourself – Sometimes, a situation came up where someone felt really strongly about something and had to stand their ground. This is difficult enough for anyone, but having a different opinion in middle school? Woof. However, because it’s in the game you can frame it as your character disagrees or that your character would never do that. An example would be the short character from earlier, didn’t agree with the plan to be picked up and tossed, or one character who was morally opposed to harming animals. It was awesome to see a normally quiet or shy student dig in their heels and stand their ground.

Lesson 5: – Math – The game is a masquerading math problem. Every action you take is a combination of your ability (ex/ strength) plus a roll of the dice, and then any bonuses you might have. You need to add them together and then make a mental calculation of your chances of success. You do this constantly, and soon it becomes automatic. There’s also money management, buying and selling items, as well as experience points to see if your character will progress and learn new abilities. Altogether it is just one long (but engaging) math lesson.

But Don’t Take My Word For It…

The Educational Benefits of Dungeons & Dragons

Using D&D in the Classroom to Make the Old New

When the Teacher Becomes a Dungeon Master

D&D is the Perfect Homeschooling Tool During the Pandemic

How Summer School Re-kindled My Love of Teaching

Ludo: A Music-Themed Board Game