Beyond What: The Why & How

I tend to  focus on a lot of practice and tangible activities. Functional thoughts and ideas that you can take directly into the classroom and implement immediately. Sometimes as an educator you need to take a step backwards and look at your lesson from a philosophical standpoint thought and think beyond simply ‘what’ you are working on, because it can be just as important to know ‘how’ you will do it and most importantly ‘why’.

A few weeks ago I wrote about the great work my school was doing with generating interest and support for the hurricane victims in Puerto Rico. I had been teaching songs for Hispanic Heritage Month, and it was an easy shift for me to focus on the island of Puerto Rico. It was a really powerful tie-in and one that benefited exponentially from the buzz around the school. We had posters and even hyped it up at our community meeting. We have such a large Puerto Rican community among both our students and staff, and so everyone was involved. In the end, the schoolwide fundraising drive ($1 dress down days & snack sales) helped raise hundreds of dollars for the community.

That was a few weeks ago, and since then I haven’t heard a word about Puerto Rico in our school, my class included. I actually inquired about which charity the money was being donated to and had a difficult time finding any answers, the current status of this inquiry is that I’m waiting on someone who will “double check for me.” I wondered where the money went, what it bought, and who it helped. I know that PR might not be in the news as much these days, but that doesn’t make the problems people on the island fact any less serious. This line of thinking opened up many new questions for me and I thought about, who’s idea was the fundraiser, and if it was teacher or student generated. Who decided on the dress down day, and maybe most importantly who chose the charity, and why?

Any good line of questioning will inevitably end up at “why” and it’s important to have an answer for that. It’s a trope in TV and movies when the parent (or teacher) replied to a rebuttal with “because I said so.” Do we really want to end up becoming those people? I’m not trying to diminish the work that any is doing, but as an educator and intellectual you need to at least be responsible to answering this question to yourself. Everything that is taught in the classroom should have an underlying reason of “why.” The time and material you cover in your room are some of the most valuable and limited resources available to you. There is a finite number of schools days in the year, and minutes in each day. If you can’t answer why you are teaching something, should you really be spending class time on it then?

Once you are comfortable with the why, it’s important you start to visualize the how. You might have an amazing product, and the best intentions behind it, but if it’s not implemented in a thoughtful manner the entire focus of the lesson might be lost, or at the very least be misrepresented. Continuing with the PR fundraiser topic, I was thinking about how it was done. Realistically, the PTO bought snacks, and students volunteered alongside teachers/parents to sell them after school. As noble as this is, is this how we can best empower our students? Instead of the snack why not have the students generate ideas? Have the students apply their talents and skills to feel as if they are functionally raising money for the cause, so that they and their talents are directly responsible for the aid sent to the country. How could it have been better: could we not have students sell raffle tickets for prizes of their own imaging, or a talented student offer face painting for a donation.

In the grand scheme I don’t want to dissuade schools, classrooms, and teachers from activities like our PR fundraiser. As I said initially, it was incredibly motivating and involved our whole community. It was a great and power experience, I’m just suggesting that we as educators can be more mindful about our practices. While the “what” we do usually ends up getting most of the focus, it’s just as important that we also know the “why” and “how” behind what we are doing. 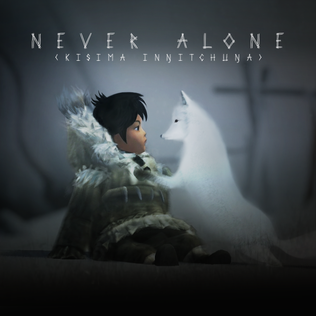 Last year there was an interactive art project released for sale (ie. video game) entitled Never Alone. In this example creating a video game is the what. However, if it ended at that (as so many of our projects and lessons do) then it wouldn’t be worth writing about. However the creators took great care in both the How and the Why.

“We paired world class game makers with Alaska Native storytellers and elders to create a game which delves deeply into the traditional lore of the Iñupiat people to present an experience like no other.

Never Alone is our first title in an exciting new genre of “World Games” that draw fully upon the richness of unique cultures to create complex and fascinating game worlds for a global audience.”

The game, art, and voices are all directly created by the indigenous tribes of the north. The hero’s journey is filled with traditional folklore and tangible artifacts. Often showing the real people and places depicted in the games itself. The player is immersed in the world of tribe and the final product becomes so much more than the sum of its parts. The journey is peppered with video clips and historical anecdotes about real events that helped inspire the story. This reinforces unspoken cultural norms and the idea of a “community-informed selflessness” that can only be learned through cultural immersion. I think this is a great example of how artists (and ultimately teachers in this case) use the How they make their product and the Why they make their product, to greatly enhance the message and impact behind the What that was made.  This is the power of introspective planning and giving a real and tangible meaning to the to material, one that I hope we can emulate in our classrooms.

The Power of Positive Relationships (a personal journey)