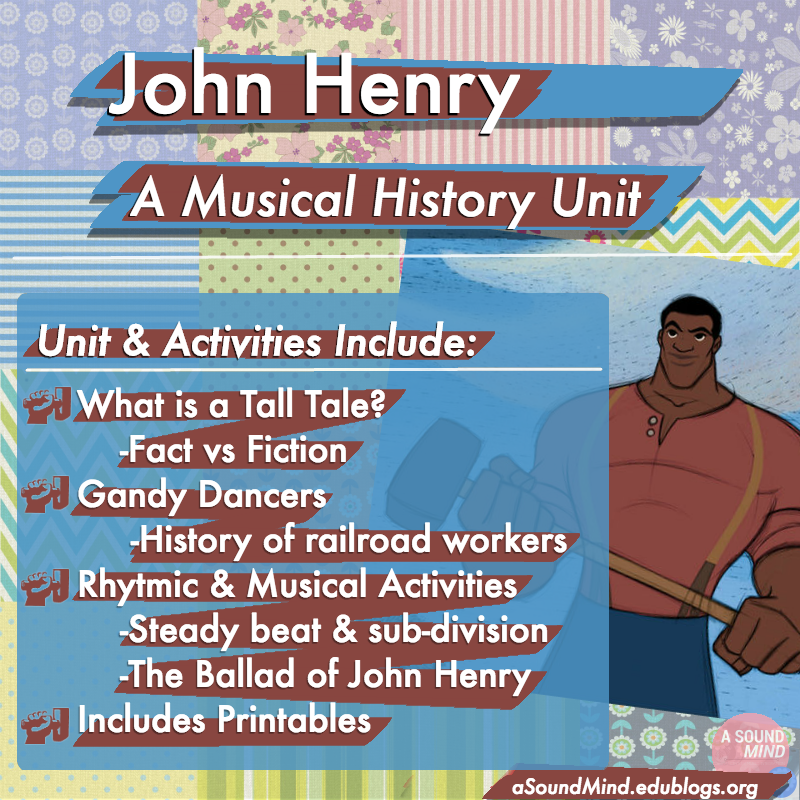 John Henry is an American Folk Legend and is the perfect entry point into topics like “Tall Tales” and “the American Railroad.” Students will love learning about these topics through musical & rhythm activities, engaging videos, and easy to use printables. So all aboard for the this amazing American tall tale!

Who was John Henry?

There are a lot of Tall Tales and folk legends in American history, but for me no one stands out like John Henry. For starters he’s incredibly charismatic and selfless (SEL tie-ins!) but he’s part of the railroads, which are just quintessential early American history. He provides an exciting entry point into what can be a tedious subject if not approached correctly. I also usually do this lesson for Black History Month in February, because he’s an independent and strong protagonist, and the leader of the story as well. There aren’t a lot of black characters who can fit that description, especially for the younger grades. I also am totally in love with the Disney: Legends take on John Henry, and use the 10 minute musical to introduce him. I’m not the only one who loves it, we usually end up watching it twice in a row, and then a few more times throughout the unit as well.

What is a Tall Tale?

An essential part of becoming a better learner, or just growing up, is being able to separate fact from fiction, and there’s a reason why it’s featured in so many Common Core standards. (here) We examine what exactly makes a folk legends or a tall tale and it turns out that the key feature is that it’s a “story or legend that is passed on through word of mouth.” Which mean speaking (or singing!) but no writing it down, which leaves room for the details to change. We take a look as a couple version of John Henry throughout the unit and really examine the details. What is the same in all the stories and what changes? We dig through the lyrics in The Ballad of John Henry and cover a few readers as well. These make for great whole class (the song) group, or individual work stations. 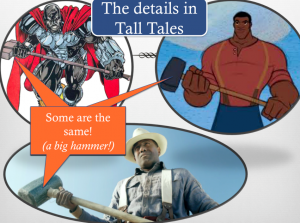 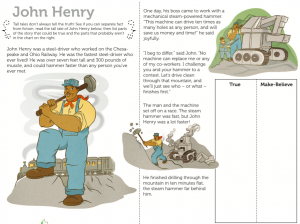 One of the most important connections to make, is that some of this is real! In fact I think the part that is areal is the most amazing part! A steel beam on the railroad was called a Gandy and the men who maintained them were referred to as Gandy Dancers. These hardworking souls used song to help them lift and move the heavy rails in unison. To see the historical footage of this is impressive regardless of your age! This is that rare tie-in where can point to exact rhythm being extremely important, and bringing this up during the steady beat activities can help get your students back on track.

We do two main activities, the first is Engine Engine #9, a personal favorite of someone who lives and works in Chicago. We have students move their arms, as if they were trains. I have the locomotive use a small drum and the caboose use an egg shaker to give the line a front and a back. We sing the song as we move around in a circle, similar to the video you see here (except a little less musical). We also play along the beat using rhythm sticks, and subdivide it. I’ll usually separate the students into 2 groups: one who plays the basic 4 beat and one with the job of keeping the rhythm. You can see examples of the two activities here & here

We also play along with the Tennessee Ford version of the Ballad of John Henry, which has a clear a steady beat in the background made by a “railroad hammer.” (another great example is this Johnny Cash song) Students love this activity and it also offers another opportunity to point out inconsistencies between all the  different versions. I use this activity to introduce the final part of the unit, which is we sing the song ourselves.

The Ballad of John Henry

This is a long song and we initially tried to just learn it normally, as a whole class. It was difficult and students kept forgetting lyrics (maybe because the story changes every time this is to be expected) but finally I just decided to break the class up into 8 different groups and give each group a verse. We broke out into our small groups and practice (I uploaded the audio in Google Classroom) and once everyone had their parts memorized, we came back together and sang it as a class. I even learned how to play it on guitar and with a particularly engaged class we sung it as a school assembly. This approach made things so easy for me I can’t believe I never used it before and I’m sure to use it again!

Integration in your Classroom

I’m a music teacher and I use this in my music lesson, but I’ve gotten quite a few compliments from classroom teachers who were glad that I was either reinforcing topics they’ve covered or teaching topics they wish they were able to get to. This unit IS a language arts unit, and IS a social studies unit. It just uses music to reach its goals. The videos and the students do most of the heavy lifting, enabling it to be taught be anyone (regardless of musical ability!) It’s one of my favorite lessons and I’ve shared it around the school to teachers who wanted to use or reuse parts in their classrooms. I love seeing music being used outside of my class and hope that anyone can find my ideas or materials useful!