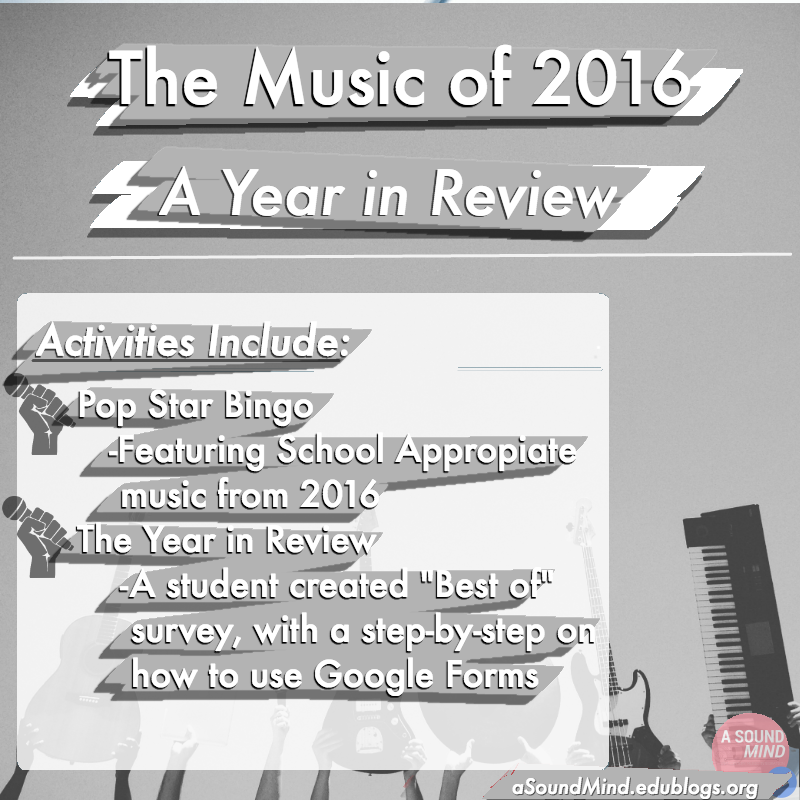 As 2016 draws to a close and we start anew with 2017, let’s take a look back at some of the most popular songs of the year. If Justin Timberlake’s smash hit, “Can’t Stop the Feeling” dominated the sales, iHeart Memphis’ “Lean & Dab” dominated my school. 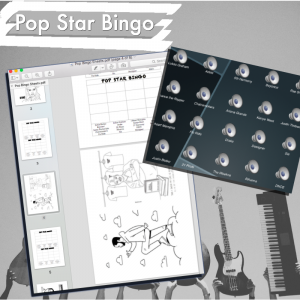 Every year I look forward to creating, and my students look forward to playing, the year in review pop bingo game. Something of a tradition, I use Billboard to help me choose songs (usually about 20 or so) for our game, and then I’ll list the artists on a blank bingo board, and get short ~30 second clips of their hit songs and then we listen and play. I usually can get about two or three games in per period and the students would happily play more if time allows. It shouldn’t be as novel as they make it seem hearing a pop song in the classroom (I use contemporary music a lot!) but they’re always trying to find that one song they love, or more importantly let their peers know what song(s) they love.

I use a blank board for the game, and let students fill in their own choices. If you’ve never done Bingo this way, it’s easy to explain. If you made copies of the board there’d be a limited number of combinations and ‘x’ amount of students would all win at the same time. However, if the students are filling in their own board, not only do they feel more invested and have a sense of ownership in the game, but each board is unique and it will dramatically cut back on the number of students who get bingo at the same time. I also put 20 artists in the game, but each board only has 16 squares. This way students need only use artists they know or like. (Don’t use Justin Bieber if you don’t want to!) 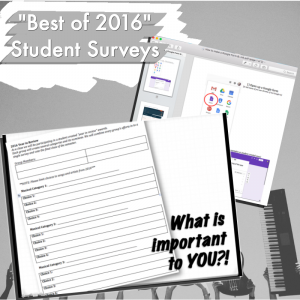 After the music and memory of 2016’s top artists has been burned into my students’ brains I usually try and see what they liked, or what they thought was important, over the past year. We’ll do a “Year in Review” and as a class make our own music awards. The student-created survey has your learners making both the categories and nominees. The tricky part is finding just artists or songs from the past year. I usually let each group use a Chromebook (or any tech) to look up songs/release dates. After each group comes up with at least 3 categories, I’ll collect the worksheets and then compile the answers into a Google Form. The following period I’ll push out the link either via Google Classroom, or create a bit.ly shortlink. Students then vote, and argue, about the result – which Google will calculate and graph for you! But since it’s all student created there’s nothing they can say to their teacher, and it usually results in several rather spirited ‘discussions.’

However it’s important for students to be aware of pop music, its influence, and the mainstream music industry in addition to the building blocks and creation components we cover in class every week. You need to, as a teacher, connect your class to their lives. If students can relate to and/or understand why the material being covered is important to them, then they’ll be much more invested in your lesson and your class. At worst, these are great activities to get their wheels spinning about what their opinion is and why they hold it.