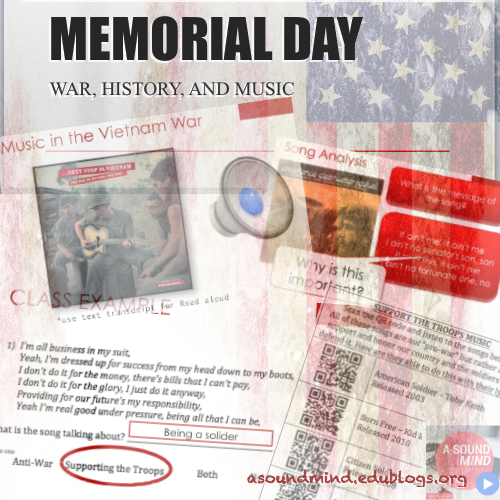 Lesson One: Set-up and teaching techniques for a musical social studies unit on Memorial Day. Focusing on the Vietnam War and how music impacted the war, and vice versa.

This is the 2nd post in a series detailing an engaging and culturally relevant unit centered around war, music, and Memorial Day. 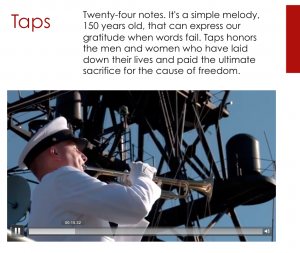 The first thing I always try and do is both engage students and activate prior knowledge. I usually begin with a discussion about Memorial Day, weekend plans, barbecuing, (etc) and then slowly shift it with questions like, “Well why do we celebrate Memorial Day?” “Are there any songs soldiers sing or use?” The classic example that most students will recognize is Taps. Even if they don’t know the name of it, you can talk about when it might be used. Use that to lead you into the lesson, discussing whether or not music has any place in war. Here’s what I determined what my objectives would be for the entire unit; I think its important to cover these and explain them at the beginning so your students know what’s expected of them and what they’re working towards. 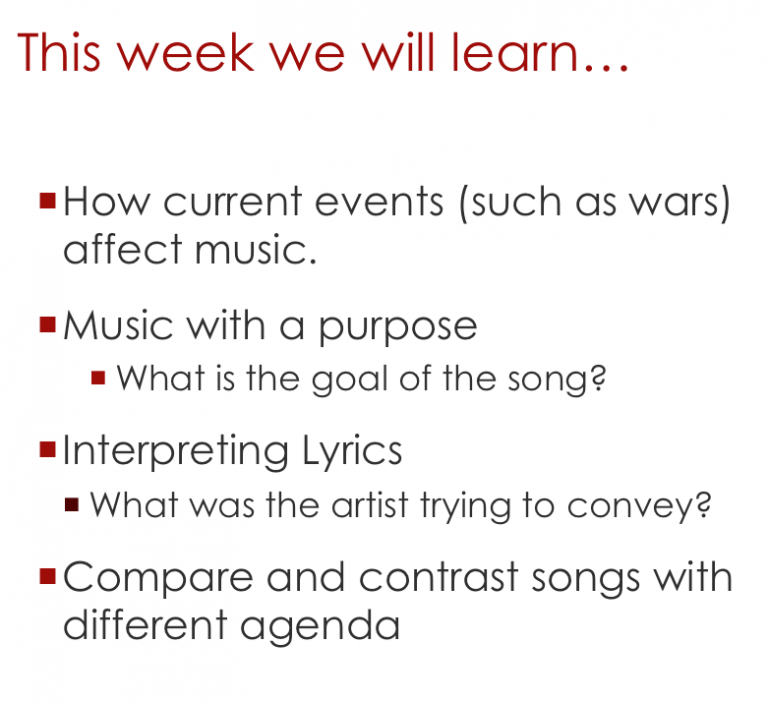 I felt the most obvious point to start was WWII because it has such rich propaganda, both in art at music. We listen to a super cheesy song called “Remember Pearl Harbor” (remember to discuss with your students about what Pearl Harbor was) and then I liken it to a video taken from the Captain America movie where he is going from town to town in a musical prompting people to buy US savings bonds. They will really immediately make this connection with an almost audible “oh yeah…”

While most students could name WWII, can they think of any other wars we were involved in? They might need some guiding questions, but the goal is to arrive at Vietnam. I did a similar version of this lesson last year because 2015 marked the 40th anniversary of the Fall of Saigon. This is where a lot of anti-war music came form and its important to touch on how both war affects the music, but the music also affects our involvement in that war!

NPR did a short little podcast last year about a compilation album called “Hello Vietnam.” The reviewer refers to it more of an “musical documentary” than an album. I pass out a transcript of the podcast and we just do a quick read through together. It’s quick and although you might get some groans when a country song comes on (I do) it helps for them to hear the music that we’re talking about. Its important to emphasize the point in the article that the mid-60’s were really the first time anti-war songs really became popular at a mainstream level.

It’s difficult for students to understand why people were so opposed to the war, because of the way our wars are conducted today they’re really far removed from it. However, its important to explain what “the draft” was and after I compare it to the NBA Draft (for example) I usually open up a random number generator (HERE) to generate some numbers. According to research only about 9% of the draft eligible candidates were actually drafted into the vietnam war, but round it up and choose 10% of your classroom.  We all have preassigned student numbers, and so I just say “That’s it, you 3 are going to war and you’ll never finish 6th grade.” It’s a bit dramatic but it really helps to get the point across.

The last thing I do is gauge their reactions before I wrap up. Most simply can’t believe it and if there’s time I give them the extra bad news, that depending on how well connected or rich your family was (or if you were in college) then you didn’t have to go to war and someone would switch places with you. This exercise and subsequent discussion always get a little lively but I love it because it means the students are engaged! So when you pick up the lesson from there next time, they’ll already be hooked! 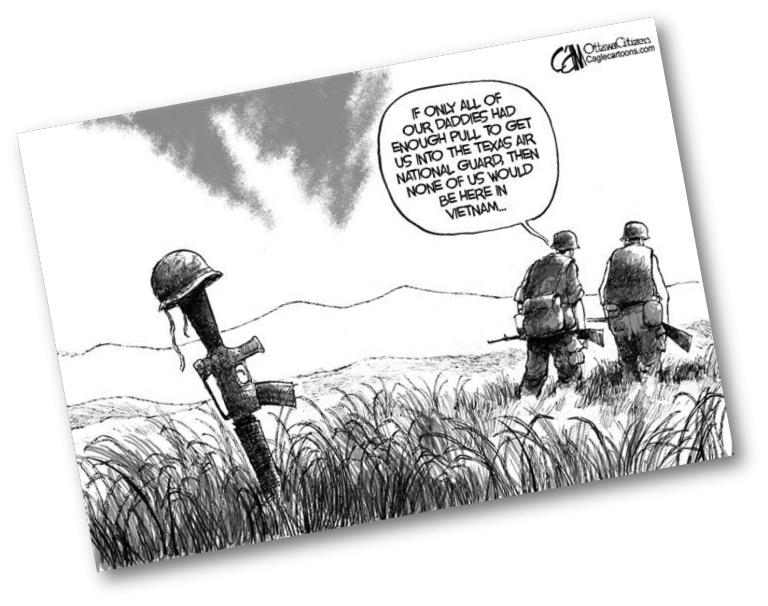