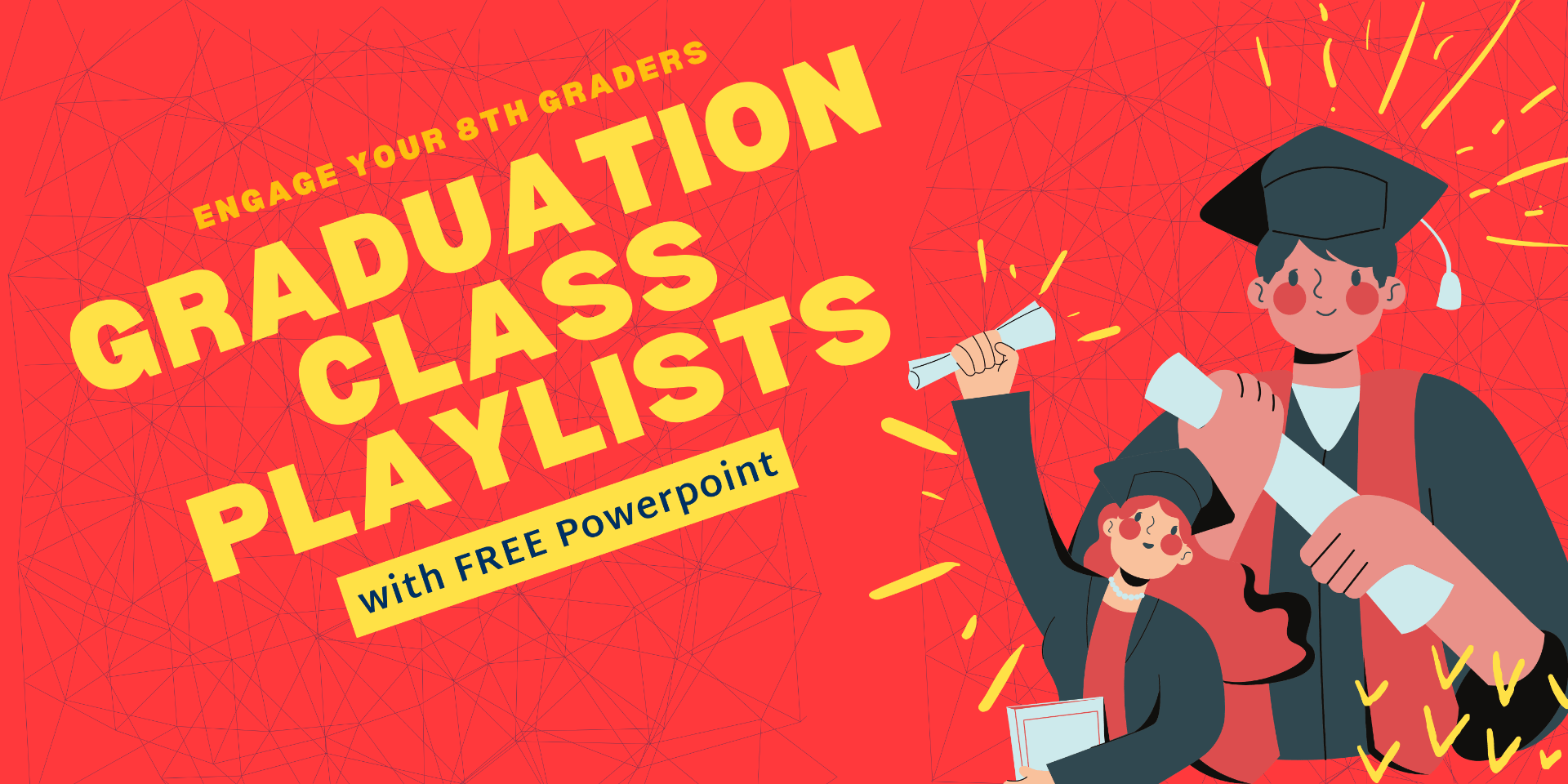 Engaging 8th graders in the final weeks of school is always a challenge, especially for enrichment teachers. However, I found a modest amount of success this year with a student-driven lesson plan based around selecting songs for their own graduation. Students first suggested songs, we compiled them into a bracket-style tournament, and then the winners formed the actual playlist that we used at graduation.

There is a direct correlation between students receiving their high school acceptance letters and their engagement in school. I get it; you worked hard for years, you already are accepted into high school, and you’re ready to move onto the next phase of your life. Great. However, we still have weeks left of class together and I need to figure out something that will keep dozens of middle schoolers engaged. This is a perennial struggle for all teachers and I always stress and struggle about what I’m going to do. So I really wanted to share what I ended up doing this year because I found a fair amount of success with it.

Talking about graduation is one of the few things that reliably gets 8th graders to engage. So I simply started this lesson talking about their graduation ceremony, asking what they know, what they would like to happen, who is attending, do they have their outfits picked out, etc etc. Inevitably (or intentionally) the topic of music will usually come up. I tell them Pomp & Circumstance will be playing as they enter and leave the ceremony, they have no say in that – but when else could we use music during the ceremony?  There are things like a “class song” or music for before or after the ceremony, walk-out songs, and many other small moments.

We talk about what makes a “good” graduation song. I give examples from past years (I had a student compose, perform, and record her own song one year!) and we look at articles like 45 Best Graduation Songs of All Time! Together we try to brainstorm what are the songs we listen to, that we would want at our own graduation.

b) Submit Your Songs

Once students are excited about it you can have them submit songs that they would want at their own 8th-grade graduation. I had them use a Google Form (through their Google Classroom) but didn’t put a limit on how many they could submit. The biggest hurdle you have to clear is this step, even with being able to directly impact their own graduation I still had a number of students who didn’t engage. If you don’t get enough songs during this step, you can’t really do the rest of the unit. Don’t be afraid to share some submission or (and this is what I did) start playing very corner graduation songs (like Hannah Montana) which is what we’ll use “unless you have anything better you could submit” The other obvious problem here is making sure the songs are school appropriate, which many submissions were not. We frequently have discussions about this in class and just because you type in “clean version” doesn’t mean it’s appropriate. (Example: a clean version of WAP is still not ok) If you wouldn’t play it for your grandma, then we’re not playing it at school.

Thanks to March Madness, there are a million websites out there to make a bracket. I used OfficePoolStop just because it was easy, but any site you end up using is fine. I didn’t rank the songs, but randomly just filled out the bracket with student suggestions. Some got lucky with an easy bracket, which there was minimal complaining about, but it was actually really easy to set this part up. We then listened to about 1 minute of each song and students voted. I was practicing hybrid/concurrent teaching at the time and had all students login into my meeting (even in-person learners) and then set up a Zoom Poll (Song 1 / Song 2) that I just used again and again with them. In the end, the song that won was a very normal song that you can listen to here.

The next step was I just ended up taking all the songs (not just the winners) and created a Spotify Playlist. I just ended up doing this on my own and arranged them in such a way that the “normal” songs that most people would enjoy were at the front of the playlist and the “meme songs” were at the end. We then used this playlist at the 8th-grade graduation ceremony before it started when families came to save seats.  There was a slide show playing, and it actually ended up fitting really well. We used it again after the ceremony when families were milling around, grabbing snacks, giving balloons, and taking pictures. I overheard at least once a student telling their family that they chose the music for the ceremony, and another asked if I could skip to the Rick Roll (which I did).

In the end, it was a great unit that allowed me to engage my 8th graders in a meaningful way that also produced a functional product that impacted the real world outside music class. It a little bit of a lift on your end as a teacher, but I really think it’s worth it and plan on doing something similar to this next year as well! Listen to the playlist below and download the Lesson Powerpoint HERE: 8th grade graduation

At Long Last: The 2020 Student Mixtape

How Summer School Re-kindled My Love of Teaching