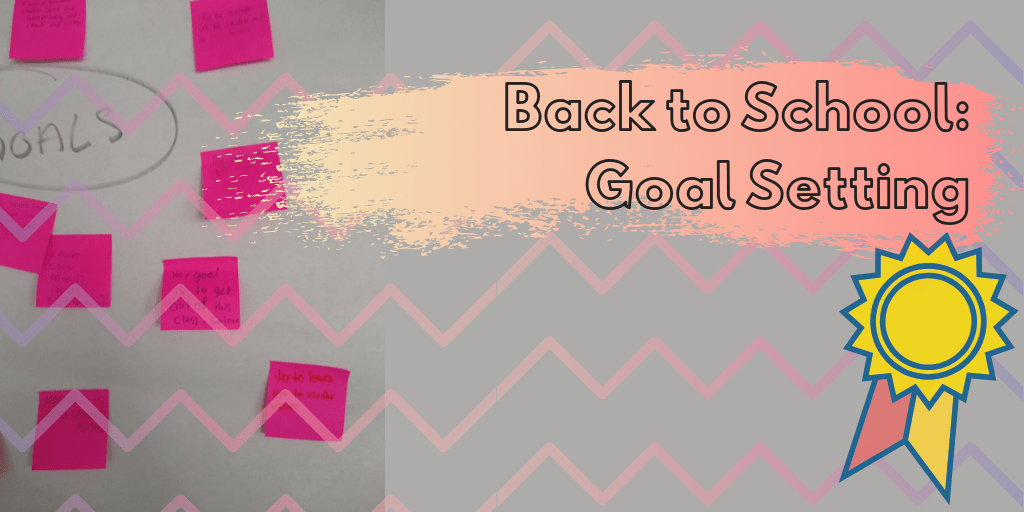 Back to School: Setting Goals

Goals, or #squadgoals as my students would say, are important and never more so than at the beginning of the year. There are plenty of posts about SMART Goals in Reading and Math, but we often don’t think of setting goals in an arts classroom. It’s just as vital for your students’ success and here’s why…

I’m the music teacher at my school.

K – 8th – I have them all. Winter concert? that’s me, graduation songs? yup! Mic isn’t working during the community meeting? You guessed it. It’s kind of a catch all term, but I was thinking about what does it mean to be a music teacher and while I was setting some personal and professional goals for myself this year, I thought about my students. They have goals in many of their core content classes, but why not mine?

We have a ton of other back to school and beginning of the year norms, I’ve talked in length about the importance of a social contract before and how it fosters both buy-in and relationships. However, to begin this conversation we didn’t even start talking about goals, but during the initial few lessons of a Middle School Ukulele Elective, we discussed practicing. Using the above TedEd talk, we talk about intentional practice and how being specific in what you work on is the quickest way to get better at that specific thing. It might seem silly but I’ve had countless middle schools (and others) mindlessly strum on the ukulele while music sat folded in their case wonder aloud, “Why am I not getting better at this?”

At what you might ask? This! What’s this? This song? This ukulele? 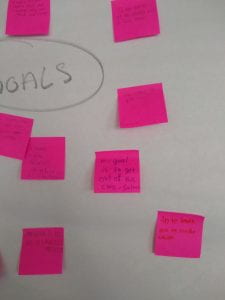 They don’t know either – and so this quarter I knew I had to have my students set individual goals for themselves. Not just set them, but refine them, and work towards them. We’d use these goals as a roadmap to determine their “success” in the course.

So after watching the video we talked about why deliberate practice was important and how specific repetition strengthens memory to muscle connections. Why might that be important? *crickets* When you practice do you practice the same thing? *crickets* Uh oh – it appears I’ve crashed up against the too cool middle school stonewall. I cold called on a student individually and asked them what they wanted out of this class – they meekly responded “uh, to get better at ukulele?” when I pressed them how they would know if they were better – it was an “I dunno” and a shrug of the shoulders.

I contrasted that with a student who I knew wanted to learn a very specific John Mayer song – and when I asked him about his goals it was a totally different conversation. He knew he’d get better when he could play more of the song, and he’d accomplish his goal when he could play it from start to finish. I saw it click in a few students and it seemed simple (it never is) and I had each write a goal on the front of a post-it with their names on the backs. When I received this absolute gem of a goal. (see right) 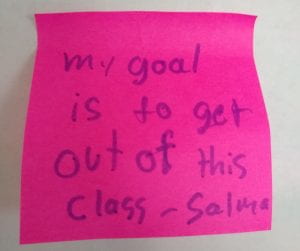 Wonderful, back at square one – or was I? When I looked through the goals, most reflected a specific, tangible, measurable goal that’d I’d be able to refer back to later in the course. I pulled that student aside and talked with them 1 on 1 (and communicated with mom) about setting a more productive goal. She landed on learning “You Are My Sunshine” because she “never finished learning it last year.” So for most of the students it helped to crystalize their vision of what they were going to work towards, and like the TedEd talk say, just envisioning yourself being successful helps you to be successful at that thing.