Combine science & music as you explore the amazing world of sound. Combing NGSS Science and NAfME music standards, here are some engaging activities that will cover sounds, vibrations, and pitch. Using a variety discovery experiences students will gain a better understanding of the relationships between vibration and sound, as well as size and pitch.

We live in a world of sound and noise, especially for learners for live in an urban environment like my students. We’ve explored the sounds of our neighborhood previously with activities like a Listening Walk, so for this unit I wanted to dive deeper. Not just what are the sounds we hear, but what is the sound we hear? I first realized there was a knowledge gap in this area when I was playing ukulele for my students and one of them touched it while I was playing (a no-no in Mr. C’s book) but he, and everyone else, noticed that the sound stopped immediately. So, after I reminded my class of expectations, I explained that my string had to vibrate in order to make their noise, and in fact all sound in the entire work have to vibrate, and that’s what sound is…. wear hearing the different vibrations of these objects. 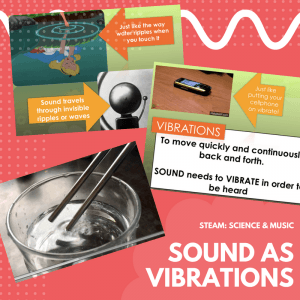 Now this explanation probably went over the heads of most of the students, but I began to design an intentional lesson around this concept. What were the essential things my students would need to know? That sound is vibration, that the materials it vibrates through change the sound, and that the size of the object change the vibrations (and subsequently) the sound. So started with a bunch of example like vibrations of a cell phone, ripples, through water, and then an interactive experiment using a tuning fork and a glass of water – these help make the world of sound visible. These the sounds waves that we normally cannot see. 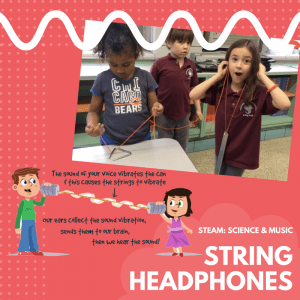 So I explained that they were vibrating through water, and when we hear them they vibrate through the air, but I wanted to show that sounds can vibrate through anything. So in a variation on the classic tin can telephone, we make our own string headphones. I didn’t explain what would happen or why, just gave them instructions on what to try and let them discover on their own. I broke the room up into different, but identical centers, each with lengths of yarn and various objects like a xylophone bar, triangle, etc. Students listened to the object normally, and then thread the yarn through the object, wrapped the string around their fingers and put them in their ears, and whammo! The sound was totally different! Not only were they amazed and engaged, but they were discovering this all for themselves and developing their own theories as to why this was happening. Plus it was pretty hilarious to just see 30 kids walking around, fingers in ears, bumping triangles into tables. This was definitely the funnest part of the whole unit for me. 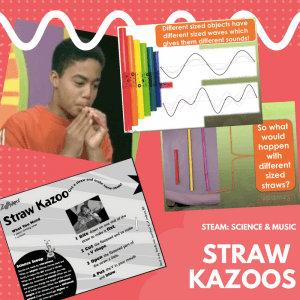 Lastly we talked about pitch, which is surprisingly easy to explain when using a visual instrument like a  xylophone or Boomwhackers. We made some pitch predictions about instruments based on their size, moved around with some super fun Pitch-Yoga, and then built our own instruments, straw kazoos. all they really have to do is just the straw into a V, bite down, and blow (remember to make it vibrate!) then once they’re all squealing and tooting away, we’ll just their straws. Change the size to change the pitch! I let the students keep them, but I heard that their homerooms teachers weren’t exactly thrilled about that decision – so I can’t really recommend it (but please let them keep them because they made their own musical instruments and will take them home to show their parents, and its just a great way to reinforce learning and to help make that real life connection)

The best part was, I never talked about science, I never said – ok we’re going to learn science now – but they sure as heck were. This is a great example of a successful STEAM unit and how you can (and should) seamlessly integrate subjects. Sounds waves aren’t them most riveting of scientific topics, but with the power of arts integration, I had class after class exploring, experimenting, and discovering sound for themselves. The students just thought it was another music class, and were therefore open to pretty much anything music related, and I used that openness to engagement in what is honestly a pretty difficult concept (explaining something that they can’t see) but give you students a chance and more often that not, they’ll impress you with what they can do!