I first met Maya Shiraishi at the Music Summit last January put together by the wonderful organization of Ingenuity. The intent and purpose of these meetings are to put educators in touch with potential partners. I met with several outstanding groups and companies that day but the partnership that has since flourished the most was with Crossing Borders Music. I couldn’t believe what Maya was telling me about their organization, not only did they have nobel goals and a real world impact, but they were also potentially FREE! As a “music-on-a-cart” teacher at an urban charter school I’m pretty used to operating on a shoestring budget so this was music (har har) to my ears. I later connected with founder Tom Clowes via email, and a few short months later, the amazing group visited my school and treated us to a fantastic concert of absolute professional quality. 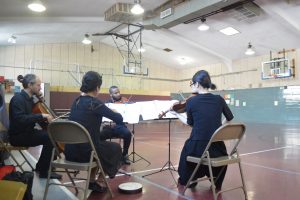 It’s so important for my students to exposed to both music and musicians of this caliber in order to develop tastes and just see what the incredibly diverse world of music has to offer. Speaking of diverse, I appreciated the attention and commitment that Crossing Borders places on diversity. Not only did they perform music from six different countries, but the performers themselves were incredibly diverse. All of my students could look at someone and see at least part of themselves represented in the group. Amazingly though, the most important part of the entire event was not simply the performances but the parts in between. The group did an amazing job preparing the students for what they were about to hear. These activities met them at their level and were interactive using hand gestures, humming, and even calling on volunteers. This not only engaged them but also made the music accessible to them.

The music they were performing was a handpicked curated collection entitled “Song of Resilience.” I spent the week prior with my student going over the vocabulary and themes that I knew would be represented in the show. In my lesson I used this powerpoint to show clips of the performers as well as touch on one of Tom’s passions, Haiti. Together we discussed the idea of what resilience is and overcoming hardships. This is incredibly evident in a country like Haiti which is still recovering from the 2010 earthquake. Equally important is the idea of using music to help learn about a country or culture and both of these are some of Tom’s goals for Crossing Borders Music. My students were so excited and engaged in the material that many recognized Tom (from the .ppt) while he was walking the hallways, and I’d be lying if I said there were no autographs given at the end of the concert. 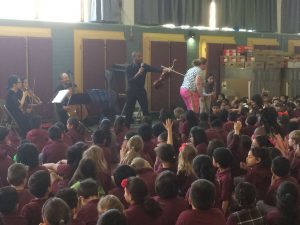 I’m so thankful for this amazing organization and the opportunities they provided both me and my students. It makes me happy to know that there are still this positive forces striving to make a difference in the world today. My students are exposed to these ideas and rhetoric everyday in my classes, but to see professionals put it into action in another experience entirely. We even had a 3rd grader run up to one of the performers and exclaim, “I want to learn the viola now!” and his response was the perfect, “Oh and you should.” I know that this meaningful experience will stretch beyond the hour-long performance as it now lives with both me and my students. If anyone, music teacher or not, is interested in expanding their students’ perspectives I cannot recommend this high quality, informative, and engaging program enough. Contact here & Donate here