To deviate from my normal postings of strictly educational content, I want to spend some time talking about personal influences that guided me to this point. That path has been winding and difficult for even me to sometimes put all the pieces together. I’ve held many jobs, lived & taught abroad, traveled extensively, and am continuing to develop as both an educator and a person. However, throughout it all music has been one consistent part of my life, and I think it’s important to take some time to acknowledge that and the things that influenced me along the way.

Cowboy BeBop for the uninitiated was a watershed moment for animation, especially anime, and a huge influence on a young highschool version of myself. The landmark series turned 20 years old today. I’m not the first to write about it, in fact it’s merits have been lauded many times over;  it fearlessly and seamlessly blended so many styles in terms of content, animation, and of course music. Sometimes referred to as a ‘space western’ it also harbors deep noir roots as well. A small crew of bounty hunters, “cowboys,” travels a lawless future across backwater planets and seedy space stations (see: wild west) populated by characters that have the antagonistic comradery of a young Butch & Sundance. The music drives the series often setting the mood or scene even before a line of dialogue is uttered, or sometimes replacing dialogue outright. It drifts from the frantic bebop in the title song (above) to Ennio Morricone inspired spaghetti westerns hymns, it has wailing harmonica blues and the bleating brass of New Orleans jazz. Often referred to as a “gateway” series to the genre of anime, I think it might be more influential as a gateway to new worlds of music. Literally 20 years later, I probably can’t add anything new to the conversation about this much beloved series, but I can talk about it’s influence on me. 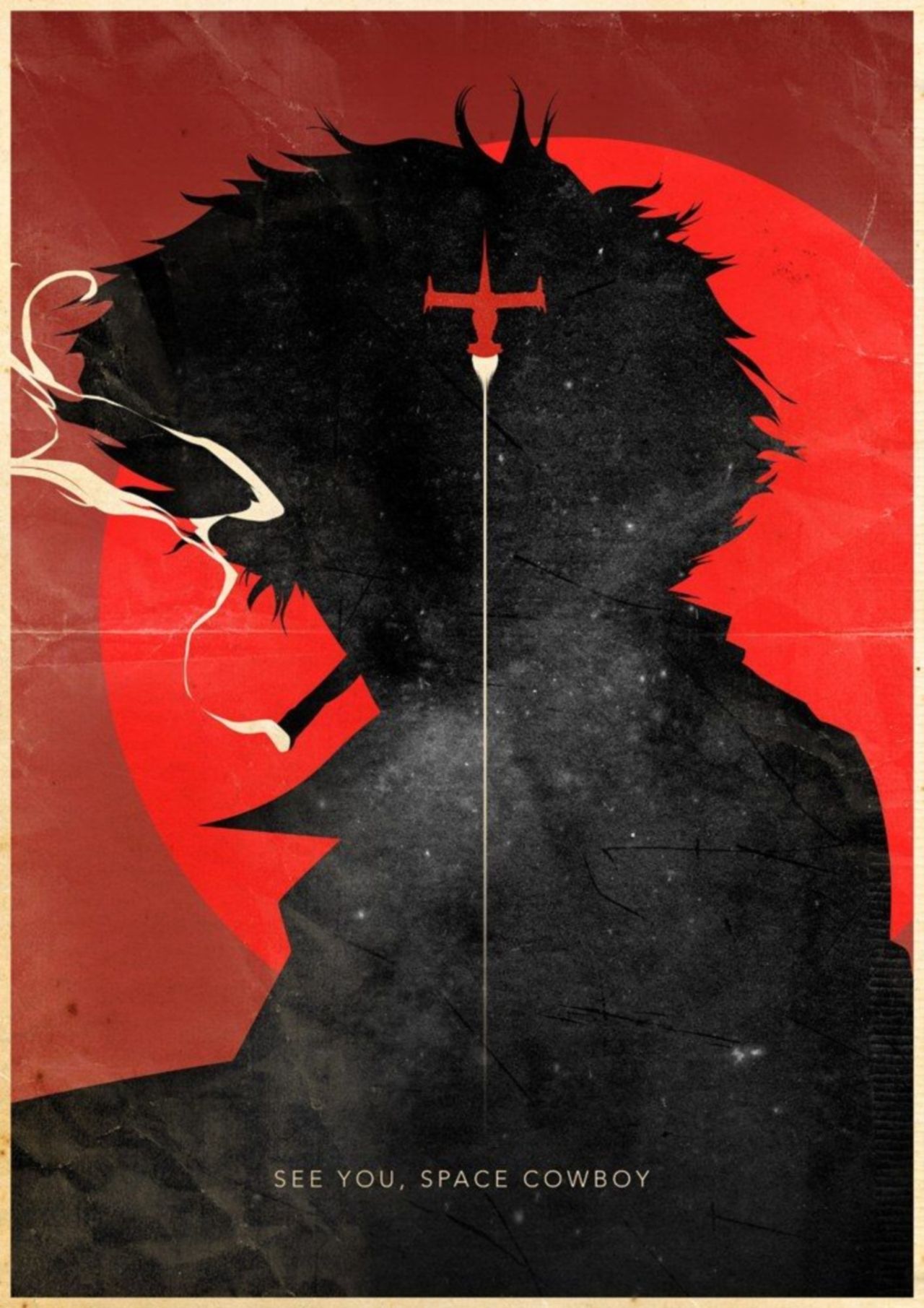 Cool….it really is the only work that can describe it for me. I know that it’s a subjective term, but in this case it’s not. Cowboy BeBop drips coolness. Everything about it is so perfectly stylized and curated, even that cool easy cadence in which Spike talks. Even though it was released in 1998, I didn’t first watch the show until 2001, when I was an impressionable junior in high school. As part of the ‘Adult Swim’ lineup, it wouldn’t show until late (midnight?) and it just opened up a whole new world for viewers like myself. It was a show whose intended audience was decidedly not children. I don’t mean this in an inappropriate way, the show didn’t swear or contain nudity, but what it offered instead was a well developed world populated with well developed characters and a new palette of sights, sounds, and themes. The good guys didn’t always win and sometimes the bad guys got away. There wasn’t always a ‘right thing to do’ and the crew of the BeBop (their ship) often found themselves in scenarios that were not black and white, but noticeably grey. Throughout it all was well a sense of danger and adventure and all along it was in this world where the sounds of long dead genres rang out and were made new. Electric, erratic, and brash it flew in the face of anything I’d ever heard on television (or radio) before. It made the blues seem contemporary, and allowed jazz to again don the mantle of an edgy counterculture, at one point the soundtrack even delves into Pan-Africanism (“The Space Lion“) yet at no point does it feel forced or contrived. I remember downloading the mp3s and burning myself a CD, I even went so far as to transfer some of the songs to a cassette tape so I could listen while driving. I never studied jazz and when I enrolled in college I didn’t try out for the jazz ensemble. However the difference it made was that jazz always seemed approachable. Not only was I unintimidated by these admittedly complex genres, but I had an appreciation for them. To this day my musical taste remains incredibly eclectic and diverse, but I can recognize objectively good music when I hear it. I have to credit that at least partially to Cowboy BeBop, for setting the bar so high and exposing me to quality.

In fact, the music often took a backseat to all of the other outstanding elements in the show. (like in this clip) The hand drawn mid-nineties animation is so crisp and the spitfire dialogue so witty, that the music might often seem like an afterthought, except its not. Nothing in the show is an afterthought, everything is near-perfect. It’s been called a ‘case study in excellence‘ and this watershed’s legacy has only grown. The way it blends so many elements, musical and otherwise, into a flawless product is almost peerless and nearly unrivaled to this day. (just look!) It’s gone on to inspire not only me but countless musicians of endless genres, and in fact I like some of the tributes by contemporary musicians more than the originals. It’s been 20 years, and I’m still listening and experiencing amazing new music because of this show and because of that it’s been incalculably influential.  So for now enjoy the music linked in this post, and until next time, see you space cowboy…