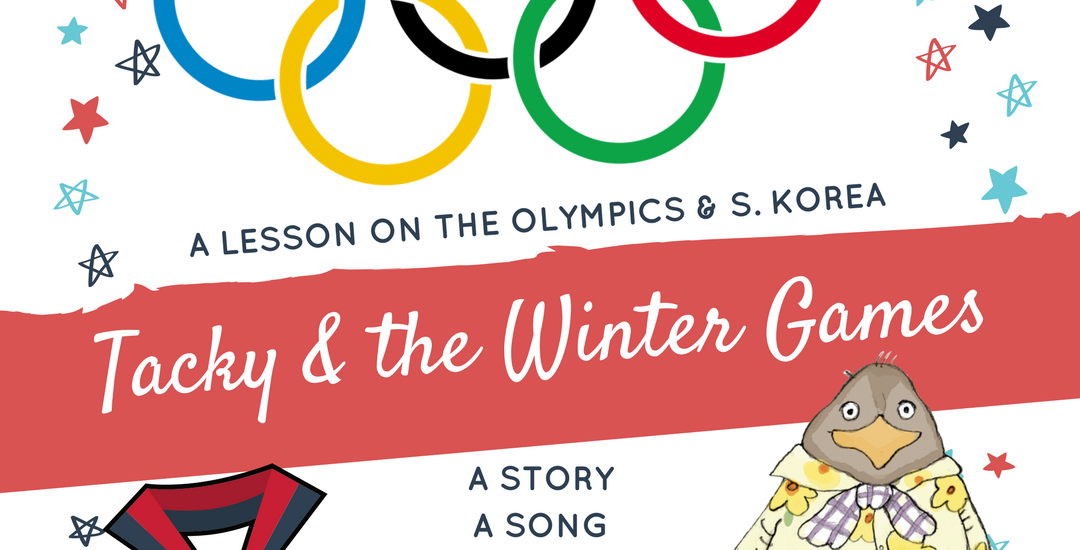 Tacky and his fellow penguins Goodly, Lovely, Angel, Neatly, and Perfect have to work hard to get in shape so they can represent Team Nice Icy Land in the athletic competitions. After rigorous training, they’re ready – but are the games ready for Tacky? 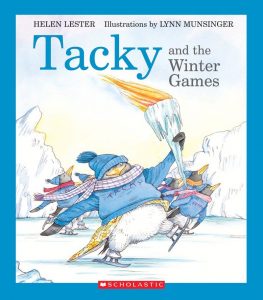 I love the spectacle of the Olympics and with the Opening Ceremonies officially starting tonight, I couldn’t contain myself! I spent all week traveling from class to class as a one man hype show for this year’s games. “Did you know the Olympics only happen once every four years? The last time we had the Winter games you were only 3 and when they’re done you’re going to have to wait until you’re 11!” BOOM Minds blown and that’s all it took! I had commercials and clips and other promotional material at the ready but how can I make it academic? What would be my arts tie-in?

Tacky! An overweight and under-smart penguin who just has a habit of messing things up. In the text, Tacky & the Winter Games, it comes with the “Winter Games Anthem” a fictional song for the sporting contest in the text. Perfect! Since the text didn’t have any accompanying audio, I brought my guitar to class, and played along while the kids sang. It was great, and in every class we did the song, the kids were so excited and memorized much quicker than I expected. Not only was I impressed, but I was glad because it gave us more time to talk about 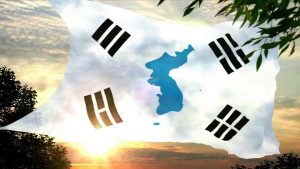 The Olympics are in South Korea this year, and they’re a really big deal. The two sides of the peninsula are experiencing warming relations and some of the athletes are even competing together on the same team. They’re reportedly marching into the opening ceremonies under a single unified flag tonight! I should say, that I lived and taught in South Korea for 4 years, and still consider it my home and the happiest time of my life. I am absolutely thrilled to see these two brother-countries marching together and singing Arirang. (This traditional folk song will serve as a proxy national anthem.) So of course, I felt compelled to give a crash course into Korean music. We started with the ancient music for royals like Gayageum and Samulnori, but quickly shifted to the massively popular K-pop. Even though most students found it silly, they thoroughly enjoyed it.

For me, I think lessons like these are some of the most important I teach. It might not have been the most rigorous, but the students were definitely excited and will likely tune-in to watch the Olympics this weekend. While watching it, they’ll understand these games are special events (taking place once every 4 years) and that they’re in a place called Korea. That context and real-world connection can make a student feel empowered, and confident. It includes them in a major worldwide event and I even bet some of the students will be teaching their parents some facts about the host nation this weekend!